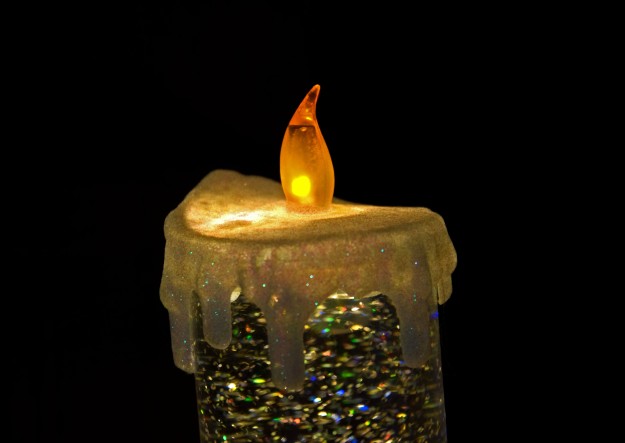 A twinkling star
In prophetic alignment
Brought distant kings
On a royal assignment.

A swaddled babe
In the lowliest stable
Secured our hope,
Where before none was able.

A tainted world
In deception and blindness,
No more need be
For God’s Light dispelled darkness.

“The people that walked in darkness have seen a great light: they that dwell in the land of the shadow of death, upon them hath the light shined.”
Isaiah 9:2

I received my faux candle as a gift last year and am now using it as a back drop for one of my Nativity sets.  Watching it twinkle and swirl is so soothing that it is easily one of my favorite Christmas decorations.

This photo was actually of sparkles on the snow, and I added some colors for the effect ~ Was too cold to go out before sunrise with my camera!

The people who sat in darkness have seen a great light,
And upon those who sat in the region and shadow of death,
Light has dawned.
Matthew 4:16

While I was out walking my dog before sun-up recently, I noticed that there was a heavy covering of frost on the ground.  Even though it was still dark outside, it glowed softly white.  It wasn’t until I passed by a street light that I saw the marvelous sparkles on the frosted grass.

The further I walked away from the lamp, the less the sparkles.  Without the light, the ground was misty and solemn, but with it, alive with a symphony of dancing colors.  All because of the light.

Jesus is the light of the world.  He illuminated the darkness.  His coming brought more than a spark; He brought the brightest Light ever, because with it came hope for deliverance from the darkness brought on by the curse of sin.  Jesus is the great Light who dawned on mankind.

Without any other power source than Himself, as part of the Trinity, He enlightened with truth, dispelled the deception of the enemy and scattered the power of death for all who will believe.

Unfortunately, not everyone flocks to the Light.  Many prefer darkness to His magnificence.  They would rather enjoy the pleasures of sin for a season.

Knowing His love and the bright hope for the future He brings, I do not understand how anyone would choose immense darkness over great Light.  But then, their problem stems from never having their understanding illuminated by the truth of Jesus.  Like those frost crystals lying lifeless apart from the light, they would rather remain in the shadow of death than shine like a diamond on streets of gold.

Me?  I prefer sparkles.  I choose to follow God’s great Light.

If you would like to learn more about the Light of God, I encourage you to purchase a new study by Julie Garro called,

Follow the Light: How God Reveals Himself Through Light

I just recently began this study, I and am enjoying it as much as I do all of her writing at Follow the Light.

The adversary is continually trying to invade our lives with darkness. He devises gloom, discouragement, hopelessness and despair.  However, for the child of God, his tactics will not prevail.  When things grow dim, and the sun seems obscured, be encouraged knowing that God’s presence will always light your way.  He will bring you back to a place where the sun is shining brightly.

Though the sun forbear;
Dark, as gloom ensues,
I will grasp Your hand,
Your promises, choose.

Though the leaf withers;
Bare, the branch remains,
I will trust Your word,
Knowing it sustains.

Though the winds howl fierce;
Near, the storm clouds brew,
I will prove Your might,
And will not be moved.

Though the world rejects;
Cold, when friends forsake,
I will keep Your love,
Safe in Your embrace.

Though the morning fades;
Dim, the sun obscured,
I will seek Your Light,
In hope rest assured.

“Do not rejoice over me, my enemy;
When I fall, I will arise;
When I sit in darkness,
The LORD will be a light to me.“
Micah 7:8

For other poems, see Poetry Corner

Recite to me your worries
I have the answer for each one.
You may not understand your problems,
But for each the victory’s been won.

Share with Me your sorrows.
Don’t hesitate to pour them out.
You may not see a way through the night,
But there’s light ahead, never doubt.

For other poems, see Poetry Corner

When it is dark outside, the light from inside our church gives the stained glass a colorful glow ~ click on photo to enlarge

I love looking at this stained glass window while inside my church, but the colors are just as beautiful when viewed from the outside at night.

My favorite part of the artwork is of the star’s light shining down on the manger.

Jesus is the light of the world!

“I have come as a light to shine in this dark world, so that all who put their trust in me will no longer remain in the dark.”
John 12:46 This firework looked electric by how it lit up the night sky.

For more posts like this one, see Fireworks Explosion.

Hidden behind the clouds

With my camera and tripod in tow, I joined the throngs of people from across the globe who captured shots of the gorgeous Supermoon this weekend.  A Supermoon occurs when the moon is slightly closer to Earth than typical, with a more noticeable effect when it occurs at the same time as a full moon.  This weekend was the moon’s closest encounter with Earth in 2013, and it was full and spectacular. 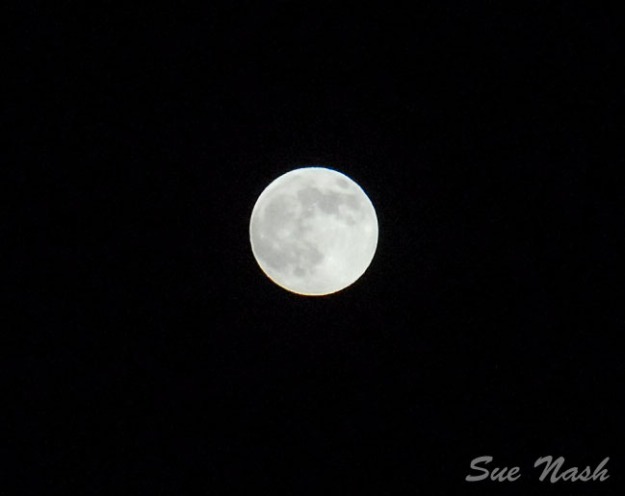 Moon, close up and milky white

These photos were my first attempt at moon shots.  Since I do not have an adequate telephoto lens, my pictures are not nearly the quality of many I have seen.  These close-ups resulted from some cropping in Photoshop.

My husband is not a photo enthusiast, but was kind enough to drive me to a place where I could try to get some silhouettes.  Unfortunately, the lighting was already much too dark for these to give me the crisp outlines of the shadows I was wanting.

Peeking behind the trees

This shot looks more like a sunset than a moonrise!

Many of these pictures are grainy, which happens with a high ISO.  I wanted to experiment with the settings to learn more about nighttime photography.  The one thing I learned from my first experience at this is that I need much more practice!

So grainy that it looks furry ~ kind of pretty, though

The moon is one of my favorites of God’s creation.  I have often wondered, though, about a verse found in Revelation describing heaven.  When I read it, it makes me wonder whether there will still be a moon there.

“And the city had no need of the sun, neither of the moon, to shine in it: for the glory of God did lighten it, and the Lamb is the light thereof.”
Revelation 21:23

When my son was young, he and I discussed this verse and my concerns.  This discussion came about because we both love the outdoors and used to spend time stargazing.  I told him that even though I understood that with Jesus in heaven we would have His light, I would still miss the moon.

I love what can come out of the mouth of ‘babes’ when discussing deep spiritual matters.  His response to my perplexity was this:

I like that interpretation.  I am just going to trust what God has in store for us in heaven, and that it will be more spectacular than what we have now.  If not a moon, then something better.  Should there be one, though, I cannot wait to photograph it.  I imagine it will be on the order of a superb supermoon!

One Mountain at a Time

One foot in front of the other. We'll get through this together.

Heavenly Raindrops
Create a free website or blog at WordPress.com.