The queen strikes again ~ the queen of mistakes.  I’m certain that none of you can reach my level of messing up.

As I mentioned in this earlier post, I have a problem with making a blundering mess out of situations, and it is very frustrating.   My latest was an embarrassing mistake, and one that the enemy used as an opportunity to steal my joy in serving others.

I have had a few days off from my nursing job.  Rather than go somewhere, I decided instead to play catch up on rest, but also to spend time with a few of my friends who are shut-in due to age or illness.

Prior to visiting two of them, I made some pumpkin bread to share, and wrote each a note of encouragement using special cards that I purchased from my friend Heidi Viars.  (*For anyone interested in Heidi’s cards, you can go to her site, Wings of the Dawn, and message her under comments.  Her cards each have one of her lovely photos attached and are beautiful).

The Queen of Mistakes in Action

In anticipation of spending time ministering to my suffering friends, I loaded the warm breads and the personalized cards into my car, and then headed out.  As soon as I arrived at the first house, the bungle occurred.

On the outside of each card, I used only the last name to differentiate.  Unfortunately, both names started with the letter B.  So, the queen grabbed the bread, but also inadvertently grabbed the wrong card, and did not realize the mistake until arriving at the second stop.

When I discovered the blunder, the enemy hammered me with embarrassment, and taunted that my good intentions were ruined.  He whispered that my friend who had gotten the wrong card probably felt slighted.  That she would consider herself just a box I had checked off before going on to others; she would surmise that she was nothing more to me than a stop on my route of delivering my meals on wheels.

God Loves the Queen of Mistakes

Fortunately, I discovered the error before going inside the second house and was able to spare myself two humiliations in one day.  I called my first friend and apologized.  She was very gracious, but the enemy tried hard to put a damper on my visiting with the other friend.

God can heal any wound, though, even those caused by our own doing.  With His help, I quickly remembered that despite the enemy’s cruel jabs, God knew my heart.  He knew that both friends are dear to me and that my intentions were sincere.

God also reminded me that I am only human.  Yet He loves our jars of clay, even broken and messed up ones like mine!  Instead of beating me up over the mistake, God helped me to shake it off and even smile.

Right after I left the second house, I went right back to the other friend to give her the correct card.  When I asked her family what they should do about having a friend as messed as me, the reply was, “To love you more.”

That is exactly what God did.  Despite yet another mistake by the queen, God showed me that it did not change His opinion of me, either.  Since His love remains steadfast, it only makes Him love me more.

Has the enemy ever beat you up because of your mistakes?  Don’t let him.  Remember that God loves you just as you are, mistakes and all.

Give, then give more.

Give your all to Me
And don’t analyze the results.
Just give
and more will be given.

Step beyond yourself;
Step out over the cliff.
Be unafraid and unashamed in your giving.

The righteous gives and does not spare.
Proverbs 21:26b

Anyone else amazed at how fast this year is going?  Thanksgiving and Christmas will be here before we know it.

Even though Thanksgiving is when we officially set aside a day for gratitude, it is never too early to give thanks.  In fact, we should offer gratitude to the Lord every day for all that He has done.

Join me in giving thanks.  Let’s celebrate thanks-giving in September!

I started us off with my poem.  Now it is you turn to share something for which you are grateful. Taken one evening at the Rez

For following Christ, we get so much in return!

*For those of you who have not yet joined my companion website, I encourage you to do so.  On Heavenly Raindrops Images, I post images like the one above, but I also post some there that I don’t include on my main website.  You will find photos or images with Scripture and a brief description about the images only.

As with any of my images, feel free to share or use without my permission.  Just don’t use for resale or commercial purposes.

Blessings on your day.
Sue

I have always had a fascination with rocks.  For this weeks photo challenge, From Lines to Patterns, I chose two rocks I found while in Homer, Alaska.  The one above has a beautiful pattern of lines encircling it.  Some of my geology enthusiast readers may know what mineral is contained in these bands.

Lines can sometimes form a closed shape.  Do you see the heart design on the front rock?  Love notes from the Creator!  🙂

Rock of Ages, cleft for me….let me hide myself in thee

One of the downsides to our technological age is the easy accessibility of explicit material through movies, music, television and the Internet.  As such, one is never too old to heed the truths contained in this timeless children’s song:

O be careful little eyes what you see

Prayer: Father, teach us to abhor that which is evil and cleave to that which is good.  May our walk be undefiled, whether in public or in the privacy of our homes.  Cleanse us of any wrongdoing, and let our lives be pure and acceptable to You.  In Your name, Jesus, amen.

A cotton ball ripe for picking

When one thinks of royal attire, cotton does not generally come to mind.  With royalty, their clothing is usually silk, taffeta or linen; something more luxurious than simple cotton.

It’s a good thing I was not born into nobility, because I have always preferred the comfort of cotton or cotton blends.

Recently, I visited a local cotton patch to photograph it prior to being harvested.  As I looked through the pictures later, I thought of how cotton is typically characterized.  It reminded me of qualities God wants manifested in our lives.

Comfortable
God teaches us to trust in the comfort of His care.

Durable
God empowers us with the Holy Spirit to strengthen us …

so that we can endure the hardships life brings.

Breathable
God fills us with His Spirit so that through us He can breathe life to others. 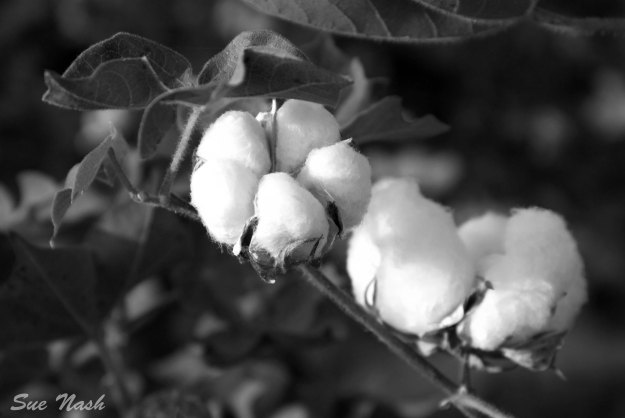 Washable
God continually cleanses us through His mercy.

Absorb-able
God enables us to absorb Truth by hearing and studying His word.

Reliable
God matures us so that we reliably represent Him, no matter life’s circumstances.

Humble
God graces us with His presence when we clothe ourselves in humility.

Clothe yourselves, all of you, with humility toward one another, for God opposes the proud but gives grace to the humble.
1 Peter 5:5

One Mountain at a Time

A journey through holistic wellness.